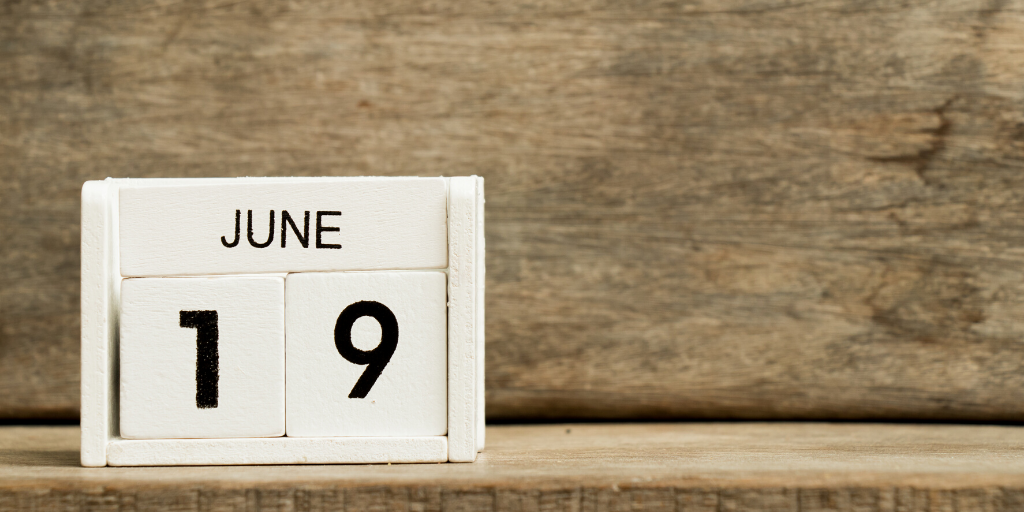 All information can be found via  JUNETEENTH.com

Juneteenth is the oldest nationally celebrated commemoration of the ending of slavery in the United States.  Dating back to 1865, it was on June 19th that the Union soldiers, led by Major General Gordon Granger, landed at Galveston, Texas with news that the war had ended and that the enslaved were now free. Note that this was two and a half years after President Lincoln’s Emancipation Proclamation - which had become official January 1, 1863. The Emancipation Proclamation had little impact on the Texans due to the minimal number of Union troops to enforce the new Executive Order. However, with the surrender of General Lee in April of 1865, and the arrival of General Granger’s regiment, the forces were finally strong enough to influence and overcome the resistance.

Later attempts to explain this two and a half year delay in the receipt of this important news have yielded several versions that have been handed down through the years. Often told is the story of a messenger who was murdered on his way to Texas with the news of freedom. Another is that the news was deliberately withheld by the enslavers to maintain the labor force on the plantations. And still another is that federal troops actually waited for the slave owners to reap the benefits of one last cotton harvest before going to Texas to enforce the Emancipation Proclamation. All of which, or none of these versions could be true. Certainly, for some, President Lincoln's authority over the rebellious states was in question.  Whatever the reasons, conditions in Texas remained status quo well beyond what was statutory.

One of General Granger’s first orders of business was to read to the people of Texas,General Order Number 3 which began most significantly with:

"The people of Texas are informed that in accordance with a Proclamation from the Executive of the United States, all slaves are free. This involves an absolute equality of rights and rights of property between former masters and slaves, and the connection heretofore existing between them becomes that between employer and hired laborer."

The reactions to this profound news ranged from pure shock to immediate jubilation. While many lingered to learn of this new employer to employee relationship, many left before these offers were completely off the lips of their former 'masters' - attesting to the varying conditions on the plantations and the realization of freedom. Even with nowhere to go, many felt that leaving the plantation would be their first grasp of freedom. North was a logical destination and for many it represented true freedom, while the desire to reach family members in neighboring states drove some into Louisiana, Arkansas and Oklahoma. Settling into these new areas as free men and women brought on new realities and the challenges of establishing a heretofore non-existent status for black people in America. Recounting the memories of that great day in June of 1865 and its festivities would serve as motivation as well as a release from the growing pressures encountered in their new territories. The celebration of June 19th was coined "Juneteenth" and grew with more participation from descendants. The Juneteenth celebration was a time for reassuring each other, for praying and for gathering remaining family members. Juneteenth continued to be highly revered in Texas decades later, with many former slaves and descendants making an annual pilgrimage back to Galveston on this date.

A range of activities were provided to entertain the masses, many of which continue in tradition today. Rodeos, fishing, barbecuing and baseball are just a few of the typical Juneteenth activities you may witness today. Juneteenth almost always focused on education and self improvement. Thus, often guest speakers are brought in and the elders are called upon to recount the events of the past. Prayer services were also a major part of these celebrations.

Certain foods became popular and subsequently synonymous with Juneteenth celebrations such as strawberry soda-pop. More traditional and just as popular was the barbecuing, through which Juneteenth participants could share in the spirit and aromas that their ancestors - the newly emancipated African Americans, would have experienced during their ceremonies. Hence, the barbecue pit is often established as the center of attention at Juneteenth celebrations.

Food was abundant because everyone prepared a special dish. Meats such as lamb, pork and beef which were not available everyday were brought on this special occasion. A true Juneteenth celebrations left visitors well satisfied and with enough conversation to last until the next.

Dress was also an important element in early Juneteenth customs and is often still taken seriously, particularly by the direct descendants who can make the connection to this tradition's roots. During slavery there were laws on the books in many areas that prohibited or limited the dressing of the enslaved. During the initial days of the emancipation celebrations, there are accounts of former slaves tossing their ragged garments into the creeks and rivers and adorning themselves with clothing taken from the plantations belonging to their former 'masters'.

In the early years, little interest existed outside the African American community in participation in the celebrations. In some cases, there was outwardly exhibited resistance by barring the use of public property for the festivities. Most of the festivities found themselves out in rural areas around rivers and creeks that could provide for additional activities such as fishing, horseback riding and barbecues. Often church grounds were the site for such activities.Eventually, as African Americans became land owners, land was donated and dedicated for these festivities. One of the earliest documented land purchases in the name of Juneteenth was organized by Rev. Jack Yates. This fund-raising effort yielded $1000 and made possible the purchase of Emancipation Park in Houston, Texas. In Mexia, the local Juneteenth organization purchased Booker T. Washington Park, which had become the Juneteenth celebration site in 1898. There are accounts of Juneteenth activities being interrupted and halted by white landowners demanding that their laborers return to work. However, it seems most allowed their workers the day off and some even made donations of food and money. For decades these annual celebrations flourished, growing continuously with each passing year. In Booker T. Washington Park, as many as 20,000 African Americans once attended during the course of a week, making the celebration one of the state’s largest.

Economic and cultural forces led to a decline in Juneteenth activities and participants beginning in the early 1900’s. Classroom and textbook education in lieu of traditional home and family-taught practices stifled the interest of the youth due to less emphasis and detail on the lives of former slaves. Classroom textbooks proclaimed Lincoln’s Emancipation Proclamation of January 1, 1863 as the date signaling the ending of slavery - and mentioned little or nothing of the impact of General Granger’s arrival on June 19th.

The Depression forced many people off the farms and into the cities to find work. In these urban environments, employers were less eager to grant leaves to celebrate this date. Thus, unless June 19th fell on a weekend or holiday, there were very few participants available. July 4th was already the established Independence holiday and a rise in patriotism steered more toward this celebration.

The Civil Rights movement of the 50’s and 60’s yielded both positive and negative results for the Juneteenth celebrations. While it pulled many of the African American youth away and into the struggle for racial equality, many linked these struggles to the historical struggles of their ancestors. This was evidenced by student demonstrators involved in the Atlanta civil rights campaign in the early 1960’s, who wore Juneteenth freedom buttons. Again in 1968, Juneteenth received another strong resurgence through the Poor Peoples March to Washington D.C. Rev. Ralph Abernathy’s call for people of all races, creeds, economic levels and professions to come to Washington to show support for the poor. Many of these attendees returned home and initiated Juneteenth celebrations in areas previously absent of such activities. In fact, two of the largest Juneteenth celebrations founded after this March are now held in Milwaukee and Minneapolis.

On January 1, 1980, Juneteenth became an official state holiday through the efforts of Al Edwards, an African American state legislator. The successful passage of this bill marked Juneteenth as the first emancipation celebration granted official state recognition.  Edwards has since actively sought to spread the observance of Juneteenth all across America.

Today, Juneteenth is enjoying a phenomenal growth rate within communities and organizations throughout the country. Institutions such as the Smithsonian, the Henry Ford Museum and others have begun sponsoring Juneteenth-centered activities. In recent years, a number of local and national Juneteenth organizationshave arisen to take their place along side older organizations - all with the mission to promote and cultivate knowledge and appreciation of African American history and culture.

Juneteenth today, celebrates African American freedom and achievement,while encouraging continuous self-development and respect for all cultures. As it takes on a more national, symbolic and even global perspective, the events of 1865 in Texas are not forgotten, for all of the roots tie back to this fertile soil from which a national day of pride is growing.

The future of Juneteenth looks bright as the number of cities and states creating Juneteenth committees continues to increase. Respect and appreciation for all of our differences grow out of exposure and working together. Getting involved and supporting Juneteenth celebrations creates new bonds of friendship and understanding among us. This indeed brightens our future - and that is the Spirit of Juneteenth.