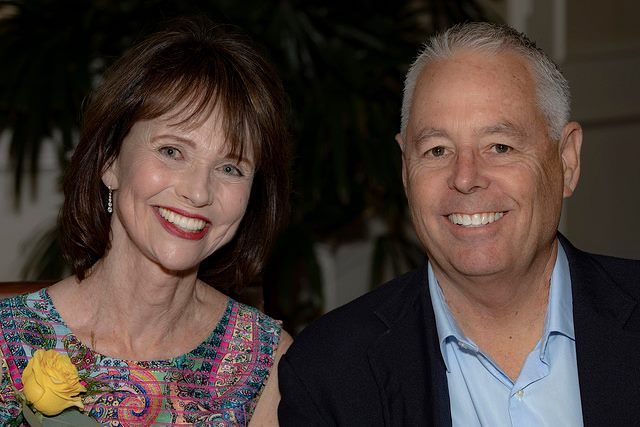 In honor of Women’s History Month & Sabina Sullivan’s Woman of Distinction Award she will be the main focus of the blog this week!

Sabina grew up in San Dimas, California. During a time when the entire region was rural: citrus and avocado groves stretched for miles. Her grandparents owned a ranch in San Dimas and her parents decided to build a home there rather than raise their family in a suburban area. Her grandparents lived a short walk through the grove, and were deeply invested in her life.  She describes her childhood as blessed and surrounded with love. “That’s one of the reasons that I’m at David & Margaret. I want to find ways that kids - all kids - can feel loved, become independent, learn and become productive member of our communities.”

Sabina and her brother had a charmed childhood. They were best pals and would remain that way through life. After school and on weekends Sabina and her brother would spend their time with the two other children in the area. They would play in fields, creeks and groves exploring their imagination in a beautiful natural playground. She notes this enabled her to gain priceless self-reliance and independence which has helped her throughout her life.

Sabina started her college education at USC, ended up at UCLA and received her BS at CalPoly, Pomona. She also took classes at Fullerton State, Mt. SAC and even Yale. “I’m just kind of interested in a lot of things so I went where the classes were offered. The Yale thing was when I lived in Connecticut. It sounds impressive but was really just classes I took because I was living there at the time and it was close.”

In her 20s, Sabina expresses she was mostly interested in politics “yes politics - crazy, eh?” and archaeology! She was very involved in local political organizations and worked on election campaign committees and other issues during the off-campaign years. She also belonged to the Archaeological Survey Association of Southern California. She participated in field surveys and recovered, identified and catalogued their findings. Coincidentally the association rented space in the (David & Margaret) Whitney basement to store and work on their collection!

Sabina has lived in La Verne for the last 20 years with her husband. When asked about her favorite place to visit in La Verne she replied, “My home. Ha! I’m kind of being facetious but kind of not. It’s nice to just be home and just yak with my husband…I love hiking the hills and eating Thai at the Siamese Restaurant.” Family is a very important part of Sabina’s life. She has three step kids whom she adores and is very proud of, two adult grandchildren from her second son and two pre-k grandkids from her first. Tragically her brother passed away when he was 37 in a corporate jet crash. “That was a long time ago but the grief of losing someone that’s part of your heart is always with you.” He is survived by his 29 year old son. Sabina describes him as a great young man, “so like his dad.” Sabina is extremely grateful to have her mother living close by. “She’s a best friend, always has been and she has a great sense of humor which as you age you must have!” She also regularly spends time with her in-laws. On the rare occasion Sabina and her husband having leisure time, they take road trips! They hike, collect rocks and enjoy finding unique “hole in the wall places.” She explains she is “not a resort person. I can’t just sit. Relaxing for me is doing. Drives my family crazy.”

Sabina is very active in protecting the community; both its residents and the wildlife. “I’m pretty interested in how La Verne will look going forward. Keeping a sensible balance between development and preservation. Open space is important. Transportation or just how people are able to move around the city. So those interests have taken me to serving on various committees for the City and private interests.” She describes her over-all mission “To make things work better: more effectively.” She is concerned with human struggles caused by the economy and other factors. “My biggest fear is the underserved. The huge issue with mental illness. Those around us who can function in jobs but would be incredibly more effective if they didn’t struggle with it. And those that just can’t function at all. Drugs - both legal and not - exacerbate every issue. Child abuse, self-abuse, crime, homelessness, children ending-up in The System. It’s almost overwhelming and it’s growing at an exponential rate…Now we have entire families homeless because housing is in short supply and the homes that are being built are over a million. Kids that have been blessed enough to have parental support. Who have gone through college and been able to land good jobs. They can’t afford housing.” She advices to focus. To look at one issue and the lives affected and to solve the problem. “That’s why I’m at David & Margaret. These kids and young adults need the resources that will help them lead productive lives. They’re not in the foster care system or even the juvenile probation system because they wanted to be there. We all want love and we all want to be able to give love. These kids have never known that. We all want to be able to work to the best of our abilities, to be productive.”

“This organization (David & Margaret) is in a sea change of growth and it’s - well it’s more than exciting. The great services it’s always provided - and I can say great services because I know how committed the staff is to these youth and I’ve seen the changed made in their lives - the successes - the 180s. David & Margaret is so interested in providing to the Transitional Aged Youth. They’re the kids that “age out” of the foster system at 18. Think about it. They’re 18 and like our kids they’ve had a roof over their heads, food, and you know fundamental needs met then - boom - 18th birthday comes and they’re out. Where do they live? How do they feed and clothe themselves. Maybe they can get a job; maybe not. Couch surf. Live on the street. I’ll tell you, if they don’t have some sort of support they will more than likely hit the sex or drug trade to survive. It’s in the stats. So D&M build a huge store where it sells discounted merchandise to the public and a café- Dave and Maggie’s - and developed a training program for these youth to get a practical work experience. D&M also built Cedar Springs an apartment complex that serves transitional age youth. The agency is totally committed to getting these young adults on track to providing for themselves and being productive citizens in our communities. The next thing on the calendar is a youth drop-in center. It’ll be a place where this same group of kids can get counseling, a meal, take a shower, do laundry, get career guidance. It’s so needed.

If kids are helped they don’t hit the streets, they become productive; they join the community; they don’t stand outside of it. But I really, really want to emphasize how if the services D&M provides weren’t available, so many kids would be lost. I mean that. D&M gives a second chance to the kids that never had a first.”

Thank you for all you provide for this organization and the community. You are a remarkable woman and we are blessed to have you as our President.

An award ceremony will be held Thursday March 28th, 2019 for Assembly District’s Woman of the Year and Woman of Distinction.

If you’d like more information about the upcoming award ceremony you can visit this linkhttps://a41.asmdc.org/press-releases/20190304-assemblymember-holden-recognizes-tournament-roses-president-laura-farber

Visit this link for more information about the Transitional Housing Program http://bit.ly/dmTransitionalHousingProgram

And this link for more information about the Youth Workforce Training Program http://bit.ly/dmYouthWorkforceTrainingProgram