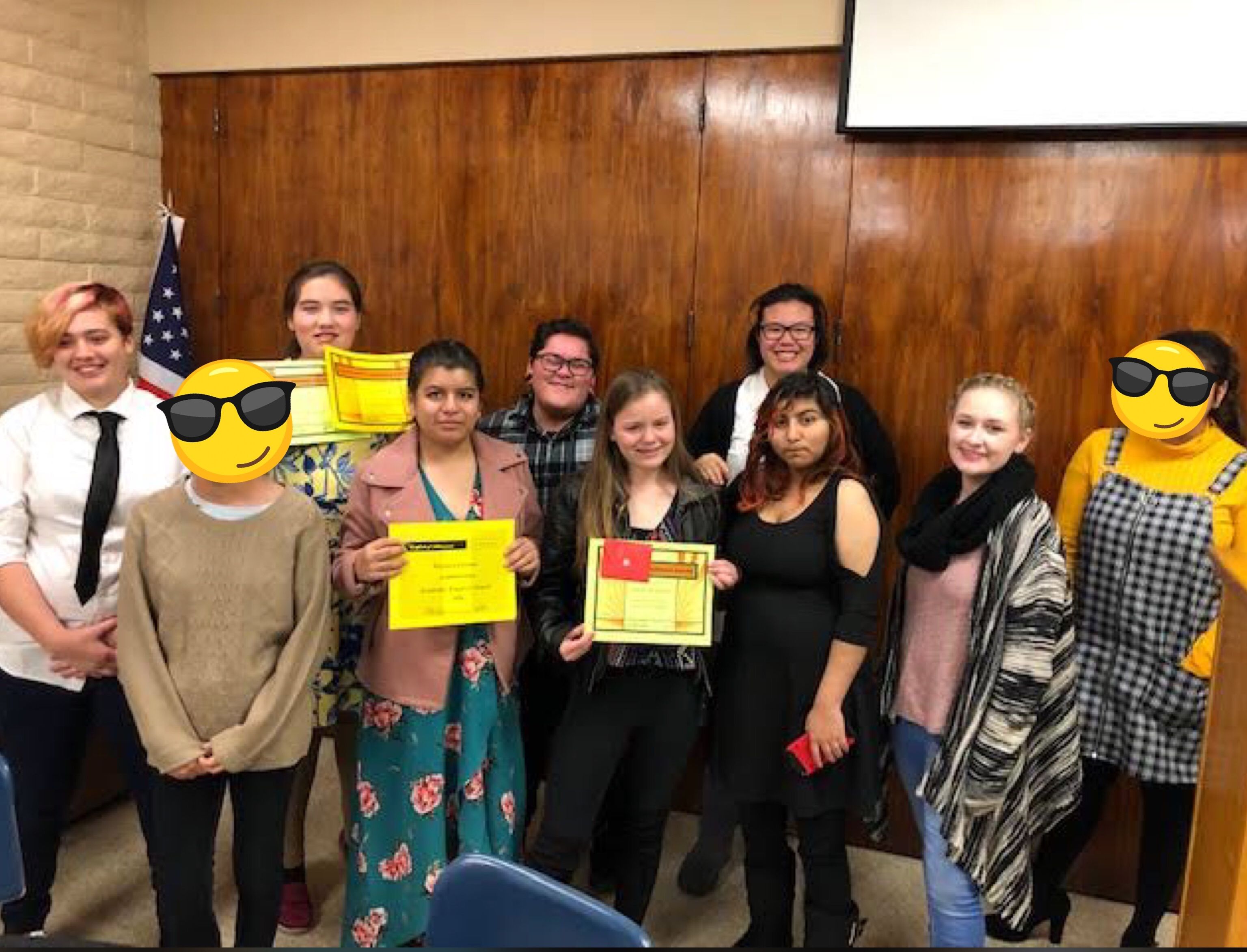 Some of the following names and details have been changed for privacy reasons.

Director Charles Rich started off the ceremony congratulating all the students and teachers on their collective efforts. Many students received awards but most notable were Andre, Carlotta, and David & Margaret resident Leilani. It was inspiring and emotional listening to their teachers present the awards.

“The person I’m recognizing tonight is someone that we see at this event each semester. This student excels both academically and with outstanding behavior choices.  This student was put in an english class this year that they kind of felt a little challenged by and they were frustrated, but they really overcame those initial frustrations to succeed and ended the semester with straight As and two Os for Outstanding on their report card. This student continues to display positive and responsible behaviors, and for these reasons I’m going to be giving this student Top Academics and Top Citizenship awards. But the recognition doesn’t stop there. This student has also clocked over 100 work experience hours this semester alone. They’ve clocked about 240 hours since they started working at the  David & Margaret cafeteria. Always one that we can count on, this student does very well in the cafeteria, and every day at school. So I am very pleased to recognize once again, for Top Academic and Top Citizenship and the Work Experience Award, Andre”

Andre shared their view of Joan Macy School stating “I think when everybody starts off here, they automatically think it’s going to be the worst thing ever. But it’s like The Best School that I would ever want to go to. The Staff give me unending support with everything that I do. There are beautiful spirits here and really it’s a pleasure to go to this school.” Regarding the teacher-student relationships Andre adds “you form a bond with all of them individually and it grows. You have (at JMS) a really strong support system.”

“My next student, it’s hard to know exactly what to say about her. I will say that since entering she has really put her school work first she has things going on in her life and she has regular teenage stuff but when she walks into the classroom, the classroom takes priority, and that’s shown consistently since she’s come. I find her to be a pleasure to have in class because she’s interested in things that are bigger than herself. She’s genuinely interested in the things that are being taught, she thinks about things in a way that is beyond every day things - she’s concerned about the world, the people in the world, animals, the environment and her learning is really being applied in a bigger sense. She can be silly and has to be told to shush sometimes, and she’s definitely a teenager but this award is for Top Citizenship and Top Academics and it goes to Carlotta”

“You had me at being shushed” - Carlotta jested as she came to the front to receive her awards. She also offered some advice for students who are new to Joan Macy School. “Give it time, put your best interest at heart, and keep an open mind. If it wasn’t for this school I would not be in school at this moment. I wouldn’t be in school. There was not a school that could help my mental state or that could offer the same support as these guys do. Even though they drive us crazy, they’re still awesome. I’m always one of the first people to talk to the new students. I always tell them ‘You’ve got to have an open mind about it! Focus on the reason why you’re here. Keep and open mind and embrace it.”

Ms. Merkel commented, “Both Andre and Carlotta have grown so much since they arrived. They still struggle with emotional issues, but have been able to maintain a positive academic balance and continue functioning in the classroom environment. Both students are actively involved in the classroom and desire to do well. And they have aspirations to go further in their educations and their careers. I have always enjoyed having them here in my classroom, they make teaching enjoyable.”

Then final awards were announced!

“We have one student tonight who has been very diligent and on top of making sure she attends school daily. It was a struggle at the beginning but she’s made a lot of effort to work on her grades and I want to read  something the staff wrote (she attends a local public high school)

‘I just wanted to inform you that Leilani attended a valentines day pizza party due her to success and bringing up her grades, she had an F in English class but she raised it to a B. She has been diligently going after school, doing tutoring with the teachers and working on raising her grades.’

I’m excited to say that she has all As and a B now! She’s doing an excellent job and they said it has been a pleasure to work with her and she is a lovely young lady. I’m really pleased with this student. She gets up every morning despite whatever happens in her cottage. She has another peer in her cottage, they made a pact, they’re going to continue to do what they need to do get their education and persevere and I can definitely say she has done that. She’s being recognized for the Consistent Citizenship Award and Shows Academic Improvement.”

Leilani also received the Marybeth Cunningham Memorial Award and this goes to a student who displays Overall Improvement in School Attendance, Excellent Citizenship and holds themselves accountable to achieve.

“With all the hardship that our youth have to face this youth has been able to overcome a variety of obstacles such as socialization with peers and with all the obstacles she has encountered she has been able to maintain an A average and when a couple of her grades slipped she was able to work with myself and Local High School and was immediately able to raise those grades. She’s extremely helpful, respectful, and supportive to her peers as well as staff. Which is a delight to see amongst so many challenges that we have to face daily here and not to mention she has the cleanest room that I’ve seen at David & Margaret!”

Your hard work is not unnoticed!!

If you’re interested in more information about Joan Macy School you can visit their pages on the David & Margaret Website!