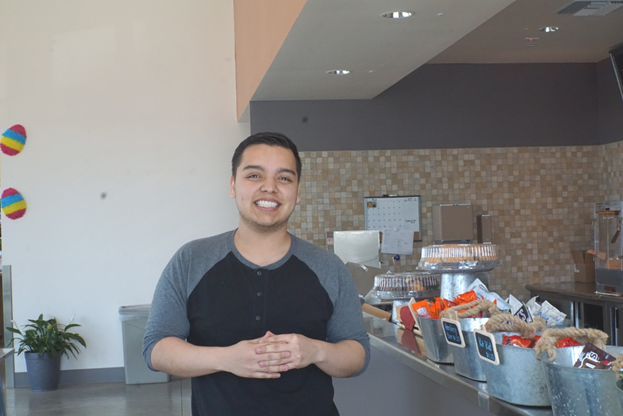 Charles has been with David & Margaret since July 2017, and together with the youth transitioning out of foster care (TAY) who are in the Transitional Housing Programs, brought about the establishment of Dave & Maggie’s Café for workforce training in early December.

As café manager, he provides on-the-job training in everything from fresh food preparation to cooking, and even equipment disassembly, cleaning, and assembly. The café is located as 1351 Palomares Ave., La Verne, on David & Margaret's south campus, and is open Monday-Friday, 8:00 a.m. - 3:00 p.m.

The menu was devised as a joint effort. As Charles says, “This place has been built not just by me, but by the actual youth.” Moving forward, he hopes to expand the workforce training to include more managerial tasks including training on what goes into ordering, recording and managing inventory.

What do you most enjoy about working here?

My initial thought was that I am here to make a difference, I am here to change lives. I think it’s going pretty well. It is definitely little things. I can even say I have a success story now.

Honestly, I think it was initially meeting the TAY participants. I think just the understanding that if you can be relatable or just real with them, it makes a difference. After initially just having one real conversation and staying open with a TAY who’s having difficulty understanding a task, I realized it was going to be okay. I think that was really good. That was one of the most positive things that realization that it was going to be fine.

If you could learn anything, what would it be and why?

Something musical, an instrument maybe. A lot of my friends are musically inclined. Maybe ukulele.

Who are your role models?

My godparents. There is something about them that when I imagine my life later, that’s what I imagine. Not that they are filthy rich or anything, but I just look at what they have between each other. They just seem to have it together.

When you were a kid what did you want to be when you grew up, and why?