Employees Turn Out for Giving Campaign 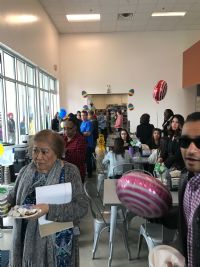 Employees are key to any capital campaign, and The Campaign for David & Margaret is no exception. Donors are more likely to favorably view a request for funding if they know that an organization's employees are supporting the campaign, too.

This week, David & Margaret staff braved threatening weather to mob Dave & Maggie's Café, where a morning event was held to remind them of their part in the effort, and to provide a fun break from the workday. They nibbled on cookies and doughnuts (thank you Grizzby's Donuts and Biscuits in Claremont for the latter!), and sipped coffee and iced tea while lining up for a chance to win café items such as popcorn or candy bars. Confetti and notes with awards were placed in helium-filled balloons to pop, while candy-shaped Mylar balloons had numbers on the top that indicated winners. Of the 83 employees who attended, about 20 percent signed up for the giving campaign, and more are expected through today. Sign-ups will be entered into a special raffle next week for a dinner out or a coveted paid day off. Our sincere thanks to everyone who participated - we can't do it without you!

Progress video of the Compass Point Drop-in Center! The Drop-in Center will provide services and support to youth i… https://t.co/EJPdJ8U87k
David & Margaret Youth and Family Services

"It’s 2020 Why do we still suck at Adoption Telling" https://t.co/mquK9vmpA7
David & Margaret Youth and Family Services

Do you or your child struggle with reading comprehension, organization, multi-tasking etc.? The Learning Enhancemen… https://t.co/DFm24ejgXw
David & Margaret Youth and Family Services